King of the Jungle – a street Action

People passing in the street. The animals of the modern city jungle. Among other species you can see the office workers, living most of their grown-up lives in front of the computer. Usually you can find them stressing to their next appointment, briefcase in hand. It’s quite a common picture in the modern city scenery.
With King of the Jungle, ReAct! will turn that picture upside down.

King of the Jungle is a street Action where we play with the context of a city square, and the pictures you might, or might not, see there. By using and mixing the common and expected elements of the specific site, we investigate how we can create uncommon and extraordinary situations and reActions.

Through physical exploration and improvisation, we play with the picture of the office worker, posing questions such as:
Who is really in control of your life, you or your laptop?

From a humorous point of view, creating clear pictures through the use of dance and acrobatics, King of the Jungle also functions as a means to discuss questions of materialism, and the role that things, objects, play in our everyday lives.
What would happen if you would lose your dearest possession? What would you go through to get it back?

You will see them, dancing.. 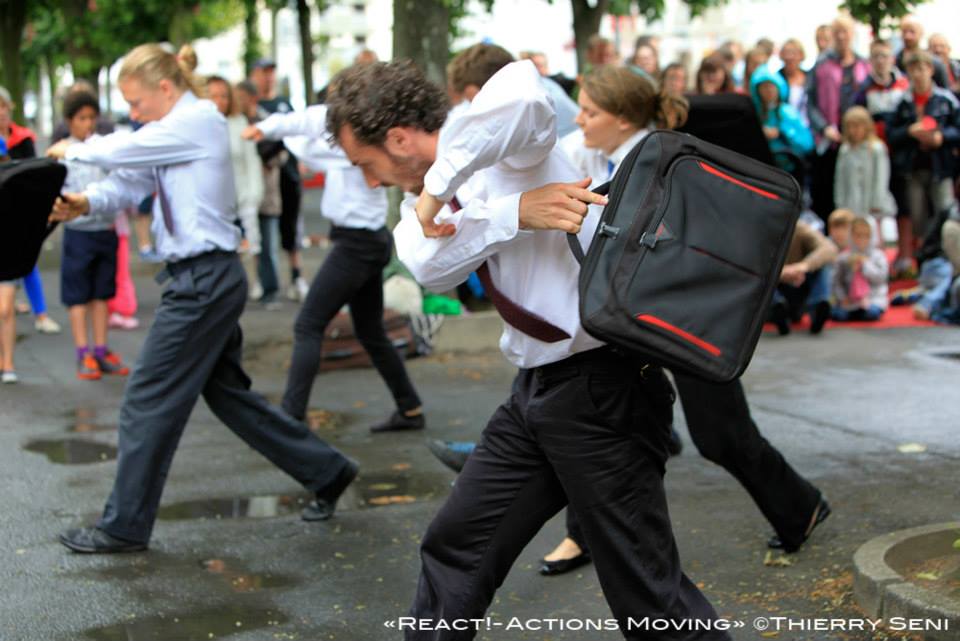 King of the Jungle is a street performance by ReAct! – Actions moving, where we test the possibilities of communication between audience and performers within the specific situation of a street show.

This performance also has the possibility of including a flash mob, performed by local people. For this we would need to conduct a workshop before the performance. The workshop is on dance, movement and expression and includes material to be used by them in the performance.